IDOT announced on Thursday, October 15th that the south leg of the intersection of Archer Avenue (IL 171) and Willow Springs Road/104th Avenue, in Willow Springs, will be closed for the installation of a new storm sewer this Friday and Saturday.
The closure will happen from approximately 9 a.m. Friday until 5 p.m. Saturday. 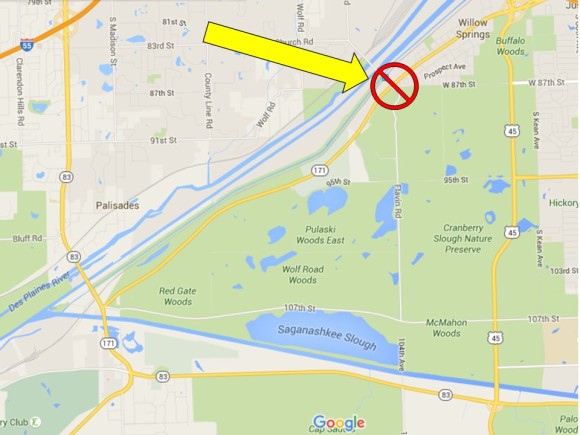 A detour will be posted. Motorists on Archer Avenue will be routed to 95th Street to reconnect with 104th Avenue. Motorists on 104th Avenue will be rerouted to 95th Street and Archer Avenue to reconnect with Willow Springs Road.
The overall intersection improvement project will be finished in late November. When complete, the intersection will have designated left turn lanes on all legs, new drainage structures, a sidewalk and multipurpose path for pedestrians and bicyclists, new commercial driveway entrances, modernized traffic signals, as well as enhanced landscaping.
Lane Reduction for I-55 U.S. 41 Interchange Reconstruction
News Release from the Illinois Department of Transportation
IDOT announced today that permanent lane closures and reductions will be put in place over several days starting next week for the ongoing reconstruction of the interchange between the Stevenson Expressway (Interstate 55) and Lake Shore Drive (U.S. 41) in Chicago.
Starting on Monday, Oct. 19, through Tuesday, Nov. 3, the following lane closures and reductions will occur, weather permitting:

Some overnight lane closures will be required to establish the work zone. Once in place by Nov. 3, the new configuration will remain until Summer 2016.

Motorists can expect delays and should allow extra time for trips through this area. Drivers are urged to pay close attention to flaggers and signs in the work zones, obey the posted speed limits and be on the alert for workers and equipment.

Earlier this summer, IDOT started the $133 million project to reconstruct and reconfigure the six bridges and ramps that form the interchange between the Lake Shore Drive and the Stevenson. The Lake Shore Drive ramps to the outbound Stevenson will be completed this year and next. Construction of the inbound Stevenson ramps to Lake Shore Drive will follow, with the entire project wrapping up in late 2017.
Weekend Lane Closures on 390 at Irving Park Road
Also, there will be lane closures for on 390 for bridge work. You can click on this link for all of the details.
One left lane in each direction between Rodenburg and Gary will begin at 10 p.m. and re-open at 5 a.m. on Monday.
Advertisement