Play Ball! Transit Options to Wrigley and the Cell

It’s baseball season again, and fans are itching to get back to the ballparks (preferably in warm weather).

U.S. Cellular Field is located at 333 West 35th Street in the Bridgeport neighborhood.

Driving to the “Cell” is fairly simple, as you are able to just take the Dan Ryan Expressway to the 35th Street exit, which virtually exits into the parking lot.

According to the White Sox website, parking lots will close 30 minutes after each game and tailgating is not permitted after games.

The cost for individual parking is $20 Monday through Saturday, and $10 on Family Sundays. You can actually purchase parking in advance at this site.

35th Metra/Rock Island Metra Stop
Get off the train at Metra’s 35th Street “Lou” Jones Station and walk to the park.

CTA Buses and Trains
U.S. Cellular Field is easily accessed via public transportation, and is located off the following “el” train lines:

The Red Line stops at 35th street above the Dan Ryan Expressway, and is less than a half of a block from the ballpark.

The Green Line stops at 35th/Bronzeville/IIT, and is less than a half of a mile away from the park. It is less than a 10-minute walk, or fans can utilize the #35 – 35th Street bus to access the ballpark.

The Chicago Cubs at Wrigley Field

Wrigley Field is located at 1060 West Addison Street on Chicago’s north side in the Lakeview neighborhood.

Wrigley Field is undergoing quite a few rennovations at this time, so public transportation is highly encouraged. In addition, parking is incredibly scarce in the area, and there is absolutely no street parking in the neighborhood surrounding the field. Cars will be ticketed and/or towed. It’s cheaper just to carry $40 in your pocket to pay a private lot somewhere in the area than to pay for a ticket or tow  if you choose to drive.

Traveling by car, you have a few options. If you are coming from the Kennedy Expressway:

OR exit at Irving Park Rd and travel east to Clark Street. Turn right (south) and Wrigley is a few blocks ahead.

The best driving option though is the shuttle bus program that allows parking off Irving Park Road a couple of miles west of the ballpark.

On night and weekend games the Cubs will provide free parking and shuttle services from 3900 North Rockwell located just east of the Chicago river immediately south of Irving Park Road.

Services begin approximately 2.5 hours before first pitch and drop off at Wrigley Field.

Returning buses board post-game at the drop-off location – East side of Clark Street north of Addison – and will run for approximately one hour after game end.

If taking Lake Shore Drive, there is no exit at Addison. Traffic must exit at either Belmont or Irving Park Road for the closest access to the ballpark. However, both of these exits and local streets are very narrow and will take extra time to travel by.

The Red Line has direct service and a stop at Addison just a half of a block from Wrigley Field.

The Yellow Line operates two hours later (until midnight) from Howard into Skokie on game nights.

The Purple Line Express will make a stop at Sheridan station on weekday night games, rather than running express from Howard to Belmont. 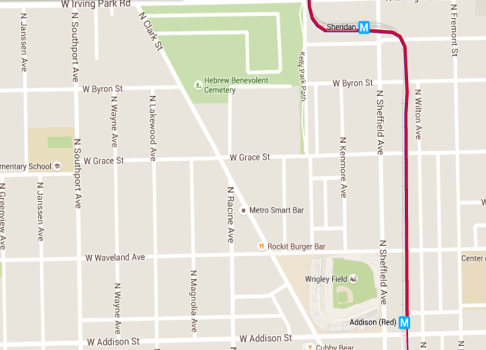 For more information on either of the parks, visit the following links: